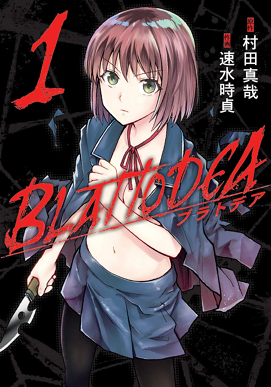 "The ant swarm keeps growing... by attacking settlements, one after another. Shall we use the troops to eradicate them, along with the civilians? Or not? This decision... I'd like to leave it up to you, Fujii Alice-san."
— Kozue "Hanakamakiri" Shiihara
Advertisement:

Blattodea (ブラトデア) is a 2020 shonen manga written by Shinya Murata and illustrated by Hayami Tokisada that's published on the Gangan JOKER magazine. It is a direct sequel to Arachnid from 2009 and its 2012 spinoff Caterpillar.

Alice Fujii is as miserable as ever. She might have survived the Organization's Arachnid Hunt, an assault of psychotic bug-themed assassins at her school, but also suffered no end of physical and emotional trauma without gaining anything in return. After choosing to face the outbreak of rapist zombies that overran Japan since the incident, Alice finds the Organization wants to take her as their new Boss — whether she wants it or not.

Putting that aside, newcomer Chiyuri Haijima is a bright and easygoing roach-girl who lives with a community of homeless people. Right before the Arachnid Hunt starts she makes friends with a troublesome ant-girl named Setsuna Dinoponera... Considering what happens later that day, what could be their role in all of this?

Spoilers pertaining to Arachnid and Caterpillar will be unmarked. Beware of spoilers related to Himenospia, too, as both series borrow a lot from each other despite not sharing the same setting.