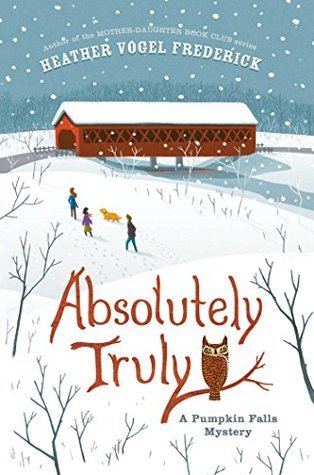 Absolutely Truly is a Middle School-aged Mystery novel by Heather Vogel Frederick, and the first book in her Pumpkin Falls Mystery series.

Truly Lovejoy is a six-foot-tall twelve-year-old girl and middle child of the Lovejoy family. All her life, Truly has been the new kid in school thanks to her dad's job as a Lieutenant Colonel in the Army, and has had to deal with being the tallest girl with big feet. When she and her family moved to Texas, however, she thought she would be staying there for good, and was over the moon with joy at the idea because her BFF cousin was there.

Then her father lost his right arm to an explosive in the Middle East.

When he got home, he was a changed man. He gave up his original plans for when he retired from the army, and when his parents decided to retire from running the bookstore in their hometown of Pumpkin Falls, the Lovejoys end up moving there, which Truly is NOT happy about.

However, while working in her family's store, Truly comes across an unsent letter in a copy of Charlotte's Web that leads her on an adventure she never thought she would have in such a small town.

The book was released on November 4th, 2014. It has a sequel, Yours Truly.