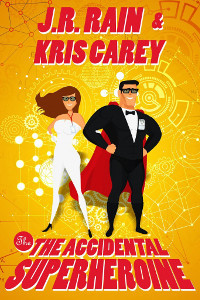 The Accidental Superheroine is a 2015 book written by Kris Carey and J.R. Rain, and published through Curiosity Quills Press, now the first book in the Quantum Superheroes series. It follows physicist Mira Verborgen, newly hired as an intern at CERN's Large Hadron Collider. Shortly after arriving, she meets, and crushes upon, handsome fellow scientist Giancarlo Colombo. Unfortunately, not only does he have a girlfriend, but the two of them also get caught up in Dr. Orlov's attempt to give himself superpowers using the LHC, and they find themselves teleported hundreds of miles away, and invisible. As Mira struggles with her feelings for Giancarlo, and control over her new powers, she also faces attempts by local governments to capture and study Giancarlo and her, as well as Orlov's attempts to capture her to be the mother of his new superhuman race.