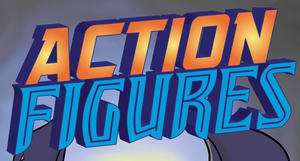 My name's Carrie Hauser and as I record this on my trusty laptop, it's New Year's Eve and, coincidentally, the end of the weirdest, wildest and worst year of my young life - and also the greatest. Over the past four months, I've met incredible people, had an amazing adventure and learned that the world is so much larger and crazier and more fantastic than I could have ever dreamed.
Oh, yeah, and I've nearly been killed several times, but I try not to think about that part too much.
Advertisement:

Action Figures is a teen Superhero series by Michael C. Bailey that focuses on the "Hero Squad" of Kingsport, Massachusetts, mostly through the eyes of Carrie "Lightstorm" Hauser. Carrie begins the series as a new-in-town almost-16-year-old with a secret ... thanks to the gift of a dying alien, she can transform into an energy being, complete with the ability to fly and project energy bolts. She soon meets four friends with gifts of their own:

The five band together to fight crime as the Hero Squad despite the disapproval of older supers like the armored hero Concorde. But with magic, aliens, and vast criminal conspiracies afoot, there's plenty for heroes of all ages to take care of - if they survive the experience.

The series to date, which takes place over about two years of In-Universe time, consists of:

An 11th book is scheduled for 2022. The series is nearing completion, with Bailey expecting it to be 12 books in total.