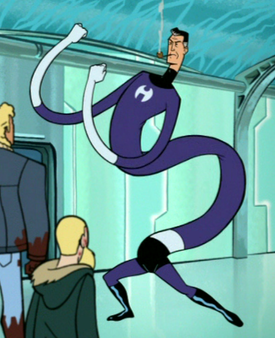 Rubber and a fighter.
"Hey, y'all, prepare yourself for the rubber-band man..."
— The Spinners, "Rubberband Man"
Advertisement:

As far as superpowers go, this one's a stretch.

A character with a limited Voluntary Shapeshifting power, that results in his or her body acting like it is made of rubber. This can be a very versatile ability as long as the user is creative and not afraid to look silly, though the silliness potential means this tends to be a power given to Fun Personified characters.

Such characters often have powers that work less like having a body with high elasticity and more like the ability to change shape at will, which makes shaping oneself into rubber balls, balloons and bands, flattening against walls, pretending to be a funny-colored rug, gliding like a parasail or folding oneself into a paper airplane all totally plausible. They can be also resistant to physical attacks since they can stretch to absorb the momentum of a projectile or fist and maybe even snap back as a counter attack. What exactly becomes of one's bodily fluids and organs is, of course, never addressed (unless written by Warren Ellis who explains all for Ultimate Mr. Fantastic). This power often includes a resistance to electricity and a resistance (or vulnerability) to heat on the presumption that gaining rubber-like stretching abilities also conveys other rubber-like characteristics, never mind that most "rubber" is actually plastic these days.

More adult-oriented media will often explore the obvious Power Perversion Potential implicit in these powers assuming they can be applied to body parts ordinary people can't consciously move. A sufficiently bawdy writer might point out that stretching and reshaping other appendages could still be greatly appreciated by one's partner and make Anatomically Impossible Sex a little less implausible. One could just imagine the many possibilities involving new and exciting positions even if most haven't been already imagined for you on various places around the internet. Many involve bondage, a fetish that seems tailor made for rubber man powers, and may include a lot of rubber (or at least PVC) already.

Compare Abnormal Limb Rotation Range. Compare and contrast Forcibly Formed Physique, which can entail some of the same physical characteristics but is sight gag rather than an acknowledged ability of the character.

Has nothing to do with the leatherman, the strawman, the Slender Man, or the song "Rubberband Girl" by Kate Bush. For the performers traditionally known as rubber men, see contortionist.