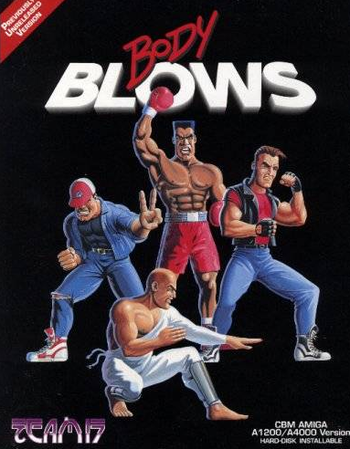 Street Fighter II was one of the hottest games of the early nineties and every Video Game console maker wanted a piece of that action. Though some companies also decided to make their own equivalent games when things didn't quite work out. This is where this series comes in: Following complaints of their port of the original Street Fighter II for the Amiga PCs, British based developer Team17 (later better known as the creator of the Worms franchise) approached Commodore offering to make an equivalent game for their systems in order to fill the void of a good Street Fighter-like fighting game.
Advertisement:

was released in 1993 for Commodore's Amiga and CDTV. It allowed players to choose one of four character in the one player mode (while two player mode allowed all ten character available) fight against six other CPU controlled opponents (similar to the first Fatal Fury game) all the way to the boss characters Max and, its true form, T-17. The sequel released later in that same year, Body Blows Galactic

took the competition literally out of this world. Two the previous game's protagonists, Junior and Danny, fought against warriors from alien worlds in an effort to win against each other and the extraterrestrial challengers in order to proclaim to be the greatest fighter in the universe. The last game, Ultimate Body Blows

, released for the Amiga CD32 in 1994 combined the casts of the both prior installments and had most of their stages. It had no story line of any sort.

This series is now quite obscure, though it does retain a cult following with some Amiga owners. A review of the series can be seen here

This Series provides examples of: