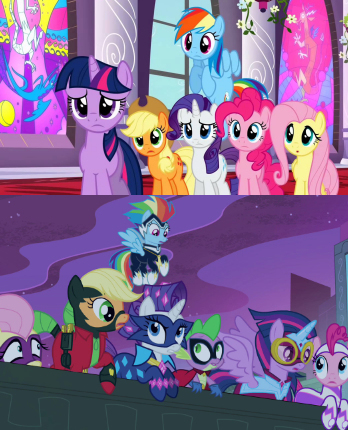 Even if they already have magical abilities, it's not a real superhero episode unless you're wearing spandex and a mask.
Fry: When you were a kid, what was your greatest fantasy?
Leela: To have parents.
Fry: Whatever. The correct answer is: To be a superhero! We have superpowers, and we're Americans. Now's our chance!
— Futurama, "Less Than Hero"
Advertisement:

An episode of a non-superhero show in which the characters temporarily gain superpowers and/or the urge to dress up in colored spandex and fight crime.

The characters in question may normally be non-powered, or they may have already had extraordinary abilities that they've never before referred to as superpowers.

Depending on the nature of the show's universe, this may occur "for real," as a dream or fantasy, or completely out-of-continuity, but in any case it involves familiar characters wearing capes, kicking ass, and going by (possibly parodic) Something Person names.

May include a stock parody fight scene referencing the '60s Batman (1966) series.

A Sub-Trope of Formula-Breaking Episode. The fanfic equivalent of this trope is the Super Fic, which usually implies a more permanent change in the characters and their setting.

A freak storm gives all the students at Bridgeton Middle School super powers.

A freak storm gives all the students at Bridgeton Middle School super powers.