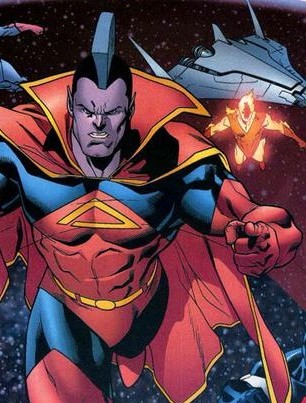 Keeping the galaxy safe from evil-doers.
Rhodey: And if you don’t mind me asking, where the hell have you been all this time?
Carol Danvers: There are a lot of planets in the universe, and unfortunately they didn't have you guys.
— Avengers: Endgame

While most superheroes are earthbound, there are those who travel the spaceways, fighting evil and protecting the innocent. These characters have many of the defining traits of any other Super Hero: costumes, codenames, powers, rogues galleries, secret identities, etc. The difference is that their adventures take place away from Earth and involve Space Opera elements: aliens, spaceships, strange worlds, sci-fi weaponry, etc. Keep in mind, an Earth-based hero who ventures to space from time to time is not an example because Earth is still their primary base of operations. At the same time, while superheroes who fit this trope sometimes venture to Earth, their primary base of operations is outside Earth's orbit, so they are still examples.

The reason behind why these heroes decide to fight evil in space can vary. Some of these heroes are aliens who simply don't live on Earth, some are a part of the Space Police, and others are from the future where space travel is much more common. The important thing to remember is that these heroes are not earthbound. In short, they are superheroes in space.