Film / Invasion of the Neptune Men 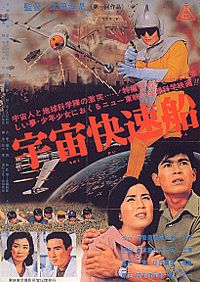 A 1961 sci-fi flick (Uchū Kaisokusen, or "The High-speed Spaceship", in the original Japanese) famous for its appearance by a young Sonny Chiba. What little plot there is concerns a gang of nameless Japanese children wandering around town and running into an invasion by the titular torpedo-headed Neptune men, some sort of "electro-barrier", and Space Chief (Iron-Sharp in the original), a superhero and "ineffectual chicken-headed bachelor" dedicated to fighting the Neptunian menace. Aside from that, it's pretty much Prince of Space with added World War II-esque Stock Footage (featuring a delightful cameo by Adolf Hitler) but without the charm of the Chicken Men of Krankor.