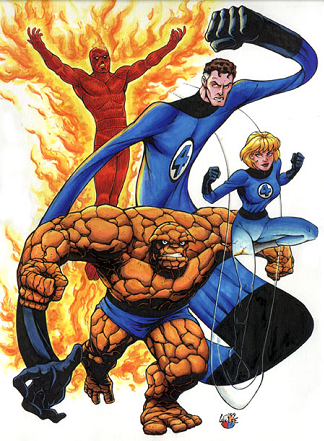 In a Super Team the characters have to complement each other. One side effect of this is that, in any group of superheroes, no two of them will have the same power.

When done well, this can be at best unobtrusive. But if the heroes got their powers from a common origin, or if their powers are granted by technology, it may seem very strange or even like a really dumb design decision. After all, The Power of Friendship is nice and all, but it'd be a real shame if the world was destroyed by a fire demon because the hero with the power of Water was out sick that day.

An unfortunate side effect is that if the ensemble is big enough, one of the heroes is going to get shafted, because What Kind of Lame Power Is Heart, Anyway?. Another unfortunate side effect is that if you have to replace someone with a Suspiciously Similar Substitute, unlikely as it may seem, he may have to have the exact same powers as the character he replaces. This is an extreme case is One Person, One Power, where each super will have exactly one power, different from others (although some of those may be versatile in practice).

This might go no farther than each hero having a unique "special attack" or melee weapon. We aren't meant to worry about the fact that this is a kind of inefficient way to arm your heroes, or about the guy whose weapon sucks. Not many writers can come up with a set of five melee weapons which are all really different from each other, and which are all useful against an equal range of adversaries, after all. Nor can everyone prove that Heart Is an Awesome Power.

Often results in a Plot Tailored to the Party or a Thematic Rogues Gallery so that everyone has something to do.

There are a few caveats:

in an ensemble for most of his history. (However, the comic book title Trinity has managed to turn Superman, Batman, and Wonder Woman into a combination Power Trio and ¡Three Amigos!.)