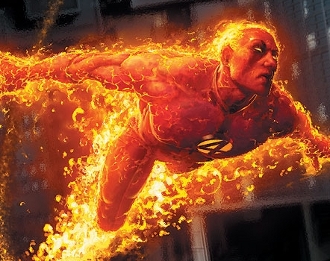 Of the four, girls find him the hottest.
Dr. McNinja: Oh, alright, the ninja poseurs out there now? They light you on fire? I guess I can spare a sec to get nuts on some punkers.
Dan McNinja: No. I lit myself on fire. Anyway, I got in pretty deep, and now these tootlepuffs are trying to get me all the time.
Dr. McNinja: You. Lit. Yourself. On fire. Why did you light yourself on fire.
Dan McNinja: Huh? Seriously? Because. They can't grab me if I'm on fire.
— The Adventures of Dr. McNinja
Advertisement:

A subtrope of Playing with Fire.

A character has the ability to set their whole body ablaze with flames. Different from Man on Fire, as the latter trope involves that person being harmed by said fire. Because fire is awesome, this makes the character automatically awesome. If they can turn it on or off, expect them to enjoy showing off via Finger Snap Lighter. May be a form of Battle Aura. Flaming Hair is a subtrope of this, where a person can only ignite their hair, as well as Elemental Punch, where the character primarily lights their fists on fire to exploit Elemental Rock–Paper–Scissors. By their nature, the character is not harmed by setting themselves on fire — they have the Required Secondary Powers.

If the character becomes fire and is not simply covered in it, then the trope is Elemental Shapeshifter. May count as Elemental Armor. An extreme part of Burning with Anger.