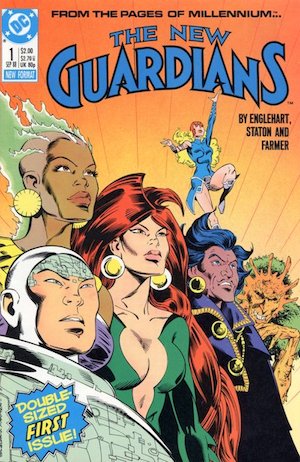 The year is 1988. Marvel's New Mutants, a team of young multi-ethnic super-heroes, has become quite popular. DC Comics, looking over its mostly-white starring line-up, decides that it was time for an Alternate Company Equivalent, just like the Global Guardians tried to be for the Uncanny X-Men. Thus came the Millennium (1988) Crisis Crossover. At the center of the story was a team of twelve special humans from all over the globe, chosen by the Guardians Of The Universe whose offspring would eventually come to replace them. Of course, like usual, the Guardians hadn't done their homework. One of the chosen (Terra), was already dead. Another was senile. Two more, KGB agent Nikolai Latikov and Iranian woman Salima Baranizar were killed by their own people. And one more, Janwillem Kroef, was a racist Afrikaner who wanted nothing to do with having to team up with other ethnicities. So, by the end of the Crossover, the group was down to seven and, surprise, surprise, they ended up with super-powers:

The team faced off against a number of antagonists, including the aforementioned AIDS-powered vampire Hemo-Goblin; Snowflame, a drug kingpin with cocaine-theme and fueled super powers; Guy Gardner, who would attempt a hostile takeover of the group's leadership; and Kroeff, who had created a race of slave-beings to be his personal army, and would put The New Guardians under his mind control.

A dozen issues in, their book would be quietly cancelled. Though the team would pop up every now and again, eventually, a Cosmic Horror Story version of Krona would apparently kill five-eighths of the team, and leave the remainder (Harbinger, The Floronic Man, Tom Kalmaku), to return to the casts of Wonder Woman, Swamp Thing, and Green Lantern respectively. A couple of lines in Legion of Super-Heroes hand-waved the team's supposed destiny as a miscalculation by the Guardians, and the whole thing was quietly put to rest. While the team would never reform, Comic Book Death combined with Never Found the Body and the occasional Crisis Crossover meant that the "dead" members would pop up alive from time to time, without explanation, and usually to be killed soon after.

All in all, a genuine, even somewhat courageous, attempt to use a multicultural super-team explore the important issues of the late eighties in a super-hero comic, but fully undermined by stereotypical characters, laughable plots, and terrible writing. We're not likely to see another super-team that's 25% HIV+ though, at least without Judd Winick having something to do with it.

The name would later be used for a Green Lantern team with little connection to the original, and little or no acknowledgement would ever be given to the team in DC continuity. The villain Snowflame got his own fairly notable fancomic, but it transplants him into the Gotham mythos. In the main universe, he was referenced in a 2018 issue of Green Lantern and returned to comic pages in a 2020 Catwoman storyline after a 32 year bus ride.

Extraño was brought back with a complete redesign in 2016's Midnighter and Apollo, now using his real name Gregorio de la Vega. His past with the New Guardians is acknowledged, and he's not exactly fond of remembering the way he used to be, but he's also recognized as a powerful sorcerer and is currently married (to a male werewolf) with an adopted child.

Tropes Displayed in The New Guardians include: