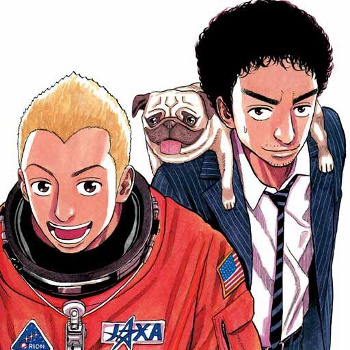 This is a story about Mutta Nanba and his younger brother, Hibito. Mutta considers himself Born Unlucky, and considers Hibito much luckier. When they were kids, they started to get interested in space, and after seeing a UFO one fateful night, they make a vow to one day become astronauts...

...However, almost 20 years have passed since that night. And while Hibito is the one who had actually pursued part of their dream and become an astronaut for JAXA (Japan Aerospace eXploration Agency, Japan's NASA equivalent), Mutta, on the other hand, decided to work as a salaryman in a car company.

After Mutta's boss makes fun of Hibito going to the moon, Mutta headbutts his boss and is summarily fired. After a call from Hibito, Mutta remembers the promise they had made as children and is inspired to follow his childhood dream. However, Mutta's far from even achieving his dream of going to space, seeing as he hasn't even taken the first entrance exam yet... How is Mutta ever going to fulfill his personal philosophy that "the older brother should always be ahead of the younger brother"?

Space Brothers, known in Japan as Uchuu Kyoudai, is a seinen manga made by Chuuya Koyama, which began serialization in Morning magazine in 2007. It was nominated in 2009 and 2010 for the Manga Taishou award, and won as Best General Manga at the 56th Shogakukan Manga Awards and at the Kodansha Manga Award (alongside March Comes in Like a Lion) in 2011.

An anime adaptation started being aired in April 2012, and a live action movie also came out in May 2012, starring Shun Oguri and Masaki Okada. Sentai Filmworks licensed the anime

for home release, while it can also be seen through Crunchyroll