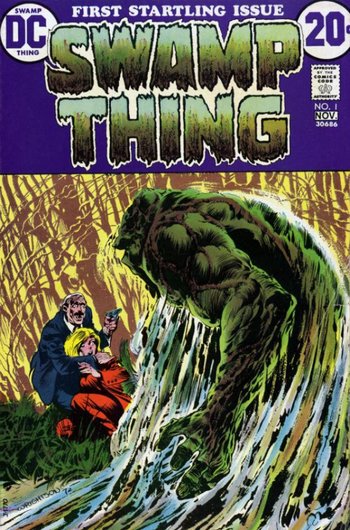 There is a red and angry world. Red things happen there. The world eats your wife. Eats your friends. Eats all of the things that make you human. And you become a monster.
Advertisement:

The book was among the first to abandon the Comics Code, and paved the way for the Darker and Edgier comics of the The '80s and The '90s, including Moore's own Watchmen and DC's Vertigo imprint, where the series eventually ended up, outside the main DCU. Swamp Thing also showed publishers that holding comics to a higher literary standard did not necessarily mean a drop in sales.

Swamp Thing went on to join Justice League Dark, and featured in regular crossovers with Animal Man as new concepts/Parliaments such as the Red (animals), Black (rot/decay/death), and Grey (fungi) were introduced, with Anton Arcane returning as a regular villain for the franchise.