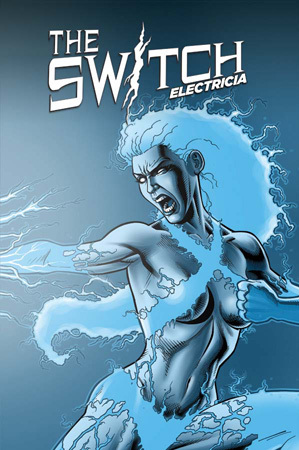 The Switch: Electricia is a Kickstarter-funded comic by Keith Champagne and Tom Nguyen.

Electricia is a villainous member of Murderer's Row, a group of the worst, most dangerous criminals in the world. Together, they've terrorized, murdered, stolen, and who-knows-what-else.

However, Electricia is starting to have second thoughts about being a villainess. If anything, she seems to crave more than terror and mayhem. She ultimately gets her chance with the murder of The Switch, a superhero that her team's tussled with for a while. She decides to go off and deal with his sidekick, The Switcheroo. However, when she confronts Switcheroo, something unexpected (for Switcheroo, at least) happens. Electricia spares her life. Of course, she doesn't tell the others.

So, with the city in need of a new hero, Electricia decides she's found her new calling. Donning the now-dead Switch's costume, she decides to be a heroine instead, fighting crimes rather than causing them. Of course, choosing such a life is not going to be easy, especially when she still hasn't completely left her old life.

The Switch: Electricia contains examples of: