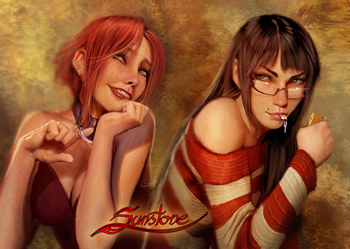 "Dear reader, this is the story of how I met the woman of my life, the one that compli... Wait, don't leave yet! This book has lots of Hot Lesbian Bondage Sex!!!! Good... That got your attention..."
— Lisa
Advertisement:

is a slice-of-life, BDSM-centric webcomic about the various relationships of people in and around the fetish scene, written and drawn by the Croatian comics artist Stjepan Šejić of Witchblade, Harleen and Death Vigil fame. Šejić is also known to the dA community as Nebezial

and is married to Linda Luksic Sejic, the artist and writer of the shared-universe webcomic Blood Stain and the Greek mythology webcomic Punderworld.

Initially focused on Lisa Williams, a budding writer who kept her submissive desires secret for years, and Allison Carter, an adorkable dominant woman largely isolated from the world around her, the original strip follows the pair as their initial online chat leads to their meeting in the real world. Complications ensue as their friendship and play-based relationship quickly develops much further than intended, and both women have to come to terms with their mutual attraction while dealing with their personal issues along the way.

Sunstone, that is, Lisa and Ally's story, concluded on October 27, 2016—almost five years after Šejić had uploaded the first drafts to DA. He has since started the follow-up comic Mercy, or Sunstone: Mercy as the print books are titled, which focuses on Alan and Anne, starting with more details about Alan's college years and relationship with Ally, and Anne's friendship with Cassie and discovery of her bisexuality. He also has future plans for two more titles in the same universe; Jasper, which focuses on side characters Marion and James; and a third, as of yet unnamed, future comic that will tie them all up.

The work has gone into print as a series of graphic novels by Top Cow; the print versions feature remastered artwork to address a few inconsistencies in the original web versions, slightly rewritten dialogue and additional bonus content. Additionally, the 'random pictures' folder on the dA site contains pin-ups and non-canon strips that the author created in the comic's early days, though many of them have since been adapted or expanded upon and introduced into the main story.

As Sunstone is hosted on DeviantArt; note that you must have a dA account and set the content filter to 'Mature' in order to read it, due to the frequent NSFW content.