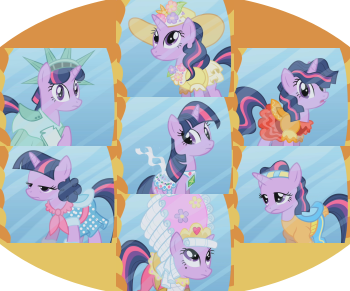 "Too green! Too yellow! Too poofy! Not poofy enough!"
Advertisement:

Someone is trying to look good for something, a date, a meeting, long-lost relative, whatever. He decides he needs to wear something special, but what?

So the character goes through a dozen different costumes in front of the mirror. He or she will often try a funny one-liner matching the costume's persona, or just as often dismiss it with a quip, usually "too butch" or "too much" (in which case the next one is "too little"). Someone else might be giving out the running commentary.

The Shopping Montage and the Makeover Montage may include or consist of a scene like this. See also Improbable Hairstyle Sequence.

See also Fashion-Shop Fashion Show (which draws on the "models on the catwalk" presentation).

Garfield tries in many costumes, getting ready for Halloween

Garfield tries in many costumes, getting ready for Halloween