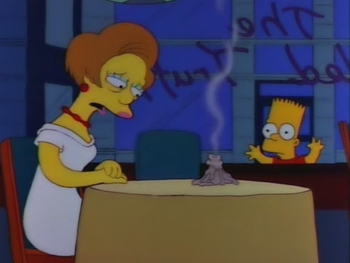 "I can't help but feel partly responsible."
Yo-yo fever hits Springfield Elementary and Bart proves to be rather skilled. However, when his latest antic destroys the class aquarium, Mrs. Krabappel confiscates his yo-yo. This spurs Bart into revenge by creating an imaginary romantic pen pal for the lonely educator. Meanwhile, Homer curbs his swearing after Flanders confronts him about his son, Todd, picking up Homer's profanity while building a doghouse for Santa's Little Helper.