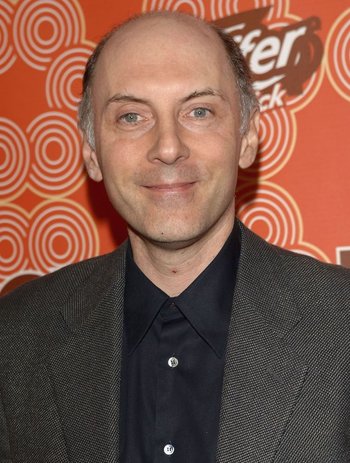 "I've made a kind of pact with myself where I said, It doesn't matter what it is as long as I'm acting."
Advertisement:

Daniel Louis Castellaneta (born October 29, 1957) is an American film, theatre and television actor, comedian, voice artist and television writer. Noted for his long-running role as Homer Simpson on the animated television series The Simpsons, he also voices many other characters on The Simpsons, including Homer's similarly abusive, senile father Abraham "Grampa" Simpson, former Harvard-bound student-turned-town drunk with Hidden Depths Barney Gumble,note He sobered up in Castellaneta's first written episode "Days of Wine and D'oh'ses," then relapsed and was put Out of Focus as of "I'm Spelling as Fast as I Can." Depraved Kids' Show Host Krusty the Clown, angry Scottish school janitor Groundskeeper Willie, the John F. Kennedy-esque Mayor "Diamond" Joe Quimby,note He comes complete with Boston accent, a large political family mired in sexual scandal and general debauchery, and chasing skirts behind his Jackie O-looking wife's back. unlucky helicopter reporter Arnie Pie, Jeremy Freedman,note Formerly named "The Squeaky-Voiced Teen," he's a teenager who can be seen slaving away at Krusty Burger, the local supermarket, either one of the two town's movie theaters — The Springfield Googolplex or the Aztec Theater, and Phineas Q. Butterfat's ice cream parlor., Krusty's hammy co-star Sideshow Mel, and (allegedly) elderly Iron Butt Monkey Hans Moleman.

Castellaneta is also the voice of the titular character in Earthworm Jim, Megavolt in Darkwing Duck, the Robot Devil from Futurama (though the Christmas episode "A Tale of Two Santas" had Maurice LaMarche as the Robot Devil as Castellaneta was too busy with The Simpsons to record lines for Futurama), The Ventriloquist and Scarface in The Batman, Earl in Cow and Chicken, Flux Wildly from Toonstruck, Arnold's grandpa Phil in Hey Arnold! and its two movies, and the second voice of Genie from Aladdin, replacing Robin Williams.

Born in the Chicago suburb of Oak Park, Illinois, Castellaneta started taking acting classes at a young age. He would listen to his father's comedy records and do impressions of the artists. After graduating from Northern Illinois University, Castellaneta joined Chicago's Second City in 1983, and performed with the troupe until 1987. He was cast in The Tracey Ullman Show, which debuted in 1987. The Tracey Ullman Show included a series of animated shorts about a dysfunctional family. Voices were needed for the shorts, so the producers decided to ask Castellaneta to voice Homer. His voice for the character started out as a loose impression of Walter Matthau, but later evolved into a more robust voice. The shorts would eventually be spun off into The Simpsons. Castellaneta has won four Primetime Emmy Awards for Outstanding Voice-Over Performance for his work on the show as well as an Annie Award for Outstanding Individual Achievement in the Field of Animation in 1993. Castellaneta has co-written eight episodes of The Simpsons with his wife Deb Lacusta (season 11's "Days of Wine and D'oh-ses," season thirteen's Clip Show episode "Gump Roast," season fifteen's "The Ziff Who Came to Dinner," season 17's Kiss Kiss Bang Bangalore" , season 22's Christmas vignette episode "The Fight Before Christmas" and "A Midsummer's Nice Dream", season 23's "The Ten-Per-Cent Solution" and season 28's "Havana Wild Weekend") and was credited as a consulting producer from 2009 onward.

Castellaneta has also appeared in some live-action TV and film roles, such as Arrested Development (as a doctor who used Homer's "D'oh!" catchphrase when he botched a surgical procedure on Michael), Married... with Children (as a gay man who stays with Al after finding out that his husband has been dancing with Al's wife Peg in one episode and a casket salesman in another), Castle (as Rick Castle's judge friend), Reba (as Reba's boss who was fighting with her ex-husband over Barbra Jean), Fantastic Four (2015) (as a childhood teacher of Reed Richards'), How I Met Your Mother (as a local homeless man who steals Marshall's charts), The Pursuit of Happyness (as the boss of a stock firm), Parks and Recreation (as a Pawnee public radio host), and Space Jam (as a random man at a basketball game).

We should also note that, unlike his most famous character, Homer Simpson (who overindulges in doughnuts, pork chops, and beer — among other things), Dan Castellaneta is actually a vegetarian, a teetotaler, and a tai chi enthusiast.