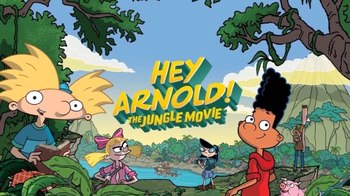 "I haven't seen my parents since I was a baby. I wish I could see them again."
"Pure of heart, that's Arnold. And that's why he deserves to win the trip to San Lorenzo. Because he's done so much for others."
— Gerald
Advertisement:

Hey Arnold!: The Jungle Movie is a Made-for-TV Movie based on the 1996-2004 animated series Hey Arnold!. The film premiered simultaneously on Nickelodeon, Nicktoons and NickRewind on November 24, 2017, and serves as both the sequel to 2002's Hey Arnold! The Movie and the Grand Finale of the series as a whole.

It takes place roughly one year after "The Journal"note the canonical final episode of Hey Arnold!, with Arnold and his classmates just finishing the fifth grade. Mr. Simmons informs his pupils of a contest in which the prize is a class trip to San Lorenzo, Central America, which, coincidentally, is the last place Arnold’s long-missing parents were seen. With the help of Helga, Gerald, and many others, Arnold and his class win the contest and go on vacation to San Lorenzo. Arnold, of course, has a different motive in mind: to achieve his ultimate dream and finally find his parents.

Their trip takes a turn for the worst when a river pirate known as "Lasombra" kidnaps Arnold and his friends. Lasombra knows of Arnold's status as The Chosen One of the fabled Green-Eyed people and intends to use Arnold to steal the sacred Corazón from them. From there it’s one jungle hazard after another, and the gang must put their heads together to get out of danger. As the leader of the journey, Arnold must make sure he and his friends survive safely, all while working towards a reunion he’s dreamed of his whole life.

WARNING: This a very spoiler-heavy movie, and while some are marked, others may not be. Proceed at your own risk.