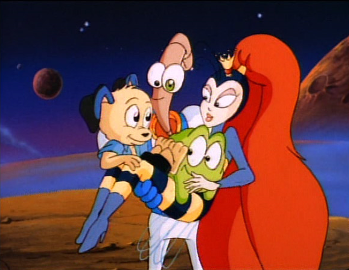 Yes, it's every bit as messed up as the video game on which it's based.

A Saturday Morning cartoon adapted from the side-scrolling action game for the Super Nintendo and Genesis by Universal Cartoon Studios (the guys who brought us Exo Squad) and aired as one of the launch series of Kids' WB!, Earthworm Jim is the saga of Jim, once an ordinary earthworm until a super-suit fell from space, and he crawled inside it and was mutated into a slightly-goofy superhero. With the assistance of his sidekick Peter Puppy (who has a tendency to turn into a hulking purple monster when provoked, but turns back if calmed down, usually by tickling) and the beautiful Princess What's-Her-Name (who was changed from her typical Damsel in Distress role in the games, with backstory portraying her as a ditzy stereotypical beauty type, into an Action Girl), Jim battles an assortment of oddball villains, including The Evil Queen Pulsating, Bloated, Festering, Sweaty, Pus-Filled, Malformed Slug-For-A-Butt (Princess What's-Her-Name's evil sister); the bird-headed mercenary Psy-Crow; the aptly-named Mad Scientist Professor Monkey-For-A-Head (and his sidekick, Monkey Professor-For-A-Head); Evil The Cat, the diabolical feline ruler of Planet Heck; and Bob the Killer Goldfish.

Rife with Postmodernism, this show played with and subverted about five tropes per week. The first season included mid-interval shorts, usually revolving around a brief glimpse of some villain not involved in the main story, but the second season dropped this.

Doug Langdale, creator of later Disney series The Weekenders and Dave the Barbarian, helped bring this show to life, given Doug TenNapel's opposition to it (though they both worked together to bring us Project G.e.e.K.e.R. shortly after this show).

of the complete series was released in 2012.

that a second animated series, Earthworm Jim: Beyond the Groovy, was in development.

In this Earthworm Jim episode, our heroes get turned into brainless Neanderthal versions of themselves. (This video was edited for your convenience)

Example of:
Took a Level in Dumbass

In this Earthworm Jim episode, our heroes get turned into brainless Neanderthal versions of themselves. (This video was edited for your convenience)