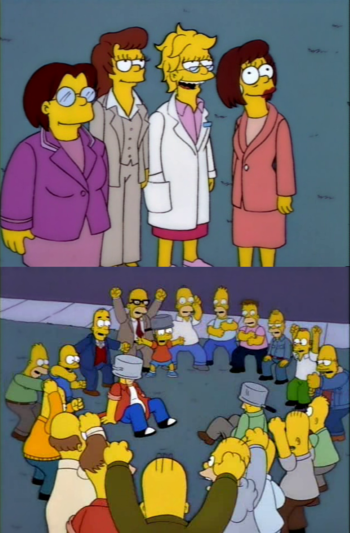 Top: Simpsons women, all successful businesswomen.
Bottom: Simpsons men, all boorish losers.
"The third character is The Girl. You know girls — those mysterious creatures you see on the bus, who have their own bathrooms, and spray stingy liquid in your face. If you don't know much about girls because your conversations with them don't last for more than a few minutes before the police are called, just use your mum as a frame of reference, characterizing the female as a disapproving, eye-rolling nanny who tolerantly wipes up the whoopsies of the idiot man-children and chastises them with the occasional spanking."
— Ben "Yahtzee" Croshaw Zero Punctuation Webcomics

In some works of fiction, the female member(s) of a group, be it a married couple, siblings, True Companions, or the cast of characters in general, are portrayed as inherently better grounded than the male members: more rational, more reasonable, more level-headed and sensible, and often morally superior. This is most common in comedy but occasionally turns up in other genres.

Note that this trope is not about any specific instance of individual female characters being particularly sensible, but about depictions in which female characters are automatically positioned as more levelheaded than their male counterparts.

This is often not a net positive trope for the female characters themselves: while in some works it is invoked as an honest attempt to refute the trope Men Are Better Than Women, it often has the effect (especially in comedy) of shifting the burden of responsibility onto women for the actions of everyone around them as well as themselves. Men can be portrayed as undeserving of blame for making an interpersonal mistake or not knowing how to do a chore because women are supposedly just naturally better at that sort of thing. A common version of this is the widely held belief that girl children mature faster than boys, which can be used to excuse boys' behavior rather than to commend girls'. It can also pigeonhole them into being less interesting than their male counterparts, since they aren't allowed to be flawed to the same degree: for a classic example, if there's a single woman in a comedy, she will probably be the Straight Man, which often translates to her being the most boring character.

The likelihood of this trope occurring is inversely linked to how many women are in the cast. More female characters mean they have to fill more roles outside of the Only Sane Man, resulting in female characters who are just as insensible if not more so than the male characters. As a result, in a mostly female cast with only The One Guy, it will be incredibly unlikely that every female character will be wiser than the sole male.

In advertisements, it's common for a woman to represent the advertiser's product, while a man represents the competition, or for women to be savvy consumers while men are Too Incompetent to Operate a Blanket. The woman patiently explains or demonstrates the superiority of the advertiser's product to the clueless man. This has roots in the resurgence of the middle-class housewife role in the 1950s and '60s when advertisers knew they could sell more products by convincing women they were experts on consumerism, and to this day it is especially pronounced in cleaning product ads that air during the day and are targeted at housewives.

In action-oriented works where both this trope and Men Are the Expendable Gender are in play, men will use violence the "wrong way" or primarily to protect the "wiser" women. (See Force and Finesse or Scientist vs. Soldier.)

A form of Double Standard, in that it holds women to an impossible ideal and depicts men as naturally stupider. Compare Females Are More Innocent, Mother Nature, Father Science and Mars-and-Venus Gender Contrast; often overlaps with Dysfunctional Family, Sage Love Interest, and Men Are Childish. Often combined with Ugly Guy, Hot Wife, Foolish Husband, Responsible Wife, and with Henpecked Husband where the husband is then portrayed as deserving the henpecking. More than often enacted through a Right Way/Wrong Way Pair. Exaggerated, this can become Wet Blanket Wife. Contrast Hysterical Woman, Clingy Jealous Girl, Psycho Ex-Girlfriend, Woman Scorned, and My Beloved Smother. Opposite Trope to Men Are Better Than Women.