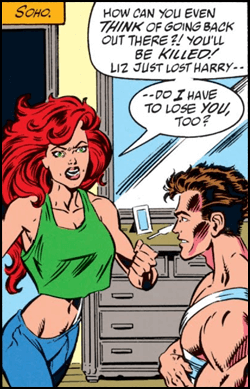 Clara Murphy looks like the most terrible female stereotype in movies, an estrogen-soaked wet blanket. There is not one scene in that trailer where she's not cooking or crying. She literally runs into the middle of the road just to stop RoBroCop from being rad on his motorbike: "You listen here, Mr. Robo, you stop being cool and go in and have a glacial emotional scene with your son! I don't care how many cops die fighting armed felons that your indestructible ass could collar in an instant, we're stopping this action right here and won't move another inch until there are emotions!"
— Cracked, referring to

The Wet Blanket Wife is the Love Interest (not necessarily a married spouse) that is a constant reminder of how uncool or troubling events in the story are supposed to be. In The Caper, she reminds The Hero that he promised to retire after that One Last Job, or is trying to get him out of the game to begin with. In a War Film or Fighting Series, she's often an Actual Pacifist who wants her love to stop fighting because she doesn't want to see him hurt or killed. In a police story, she wants her husband to spend more time at home and less working cases, despite knowing what he did before she married him and that he doesn't control when a crime occurs. In a Superhero story, she chews the main character out for spending too much time crimefighting or perhaps doesn't even know his Secret Identity and angrily wonders where he's run off to. In short, the character exists to slow the pace of the story and provide emotional heft.

This trope is often paired with the Henpecked Husband or Parenting the Husband, and sometimes the arguments form an Awful Wedded Life between the couple. However, the overlap isn't necessary. A woman tearfully begging her Action Hero husband not to go do whatever dangerous thing he wants to do to avoid being widowed can be Happily Married, but she's still trying to get him not to do the awesome thing that the audience paid to see (however justifiably). Scenes involving this kind of wife will involve her fretting or angsting over the events of the story and otherwise reminding the audience how "awful" this is supposed to be.

This is an Always Female trope, but that doesn't mean there aren't rare male versions. Because of tropes like Men Are Tough and Men Act, Women Are, it's usually just assumed that a husband or boyfriend in a heteronormative relationship will be the one advancing the plot. For that reason, this is also a Sub-Trope of Acceptable Feminine Goals; in this case, trying to salvage her relationship/marriage/home is the greater priority for the woman than whatever else is supposed to be going on in the story. Again, even if she's right, the issue is that the husband doesn't seem to agree, and more often than not the story is told from his perspective. At worst, she's an unsympathetic character because if the hero listens to her and gives up being a hero, people will die (unless he's only one part of a large team, or has a sidekick who can take over). And lastly, still-existing power imbalances in relationships mean that a plotline involving a man trying to control a woman, by assumption his wife, may end up classified in very different terms than if a woman did the same.

Compare and contrast The Obstructive Love Interest, who is against anything their significant other tries to do, as a result of misunderstandings, personal insecurities, and any other number of reasons. See also Yoko Oh No, the girlfriend/wife of an artist that is blamed for destroying their career. Also compare The Killjoy.

Contrast the Battle Couple and Outlaw Couple, who usually avert this trope, and the Understanding Boyfriend. Also Contrast Disneyland Dad, when a parent with less responsibility doesn't enforce as many of the rules the other does, making them seem like the boring one.