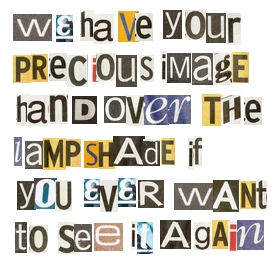 Wouldn't it be easier to actually look for words rather than separate letters?
"Susie, if you want to see your doll again, leave $100 in this envelope by the tree out front. You cannot trace us. You cannot find us. ...Sincerely, Calvin"
— Calvin and Hobbes
Advertisement:

The classic, instantly recognizable ransom note made from individual clippings of letters or words glued onto a piece of paper. In modern fiction, distorted phone voices have the same meaning.

The Real Life justification is, of course, that handwriting is identifiable. A largely Discredited Trope in modern fiction, given the prevalence of computers, telephones and other more convenient forms of covert communication. A modern criminal is more likely to simply type up a message and print it.note Although note that some printers will leave a watermark

on every piece of paper they print stating their serial number. It's also possible to use forensics to analyse the exact chemical composition of the ink used (which will vary based on who made it and when they made it) to narrow down the suspects, meaning a printed letter can be traced just as easily, perhaps even easier. note  Having said that, because this trope has been used in Real Life, most national police forces are prepared for it by maintaining a database of widely-available newspapers & magazines, because sometimes the clipped letters are distinctive enough to be able to track down where they came from. The modern crook has little use for taking the time to create a note that can accumulate fingerprints and DNA evidence, not to mention result in a suspicious pile of hacked-up magazines.

"I know what you did"

A clichÃ© threatening letter arrives just outside Pixie's office, but there's something a little off about it...

"I know what you did"

A clichÃ© threatening letter arrives just outside Pixie's office, but there's something a little off about it...