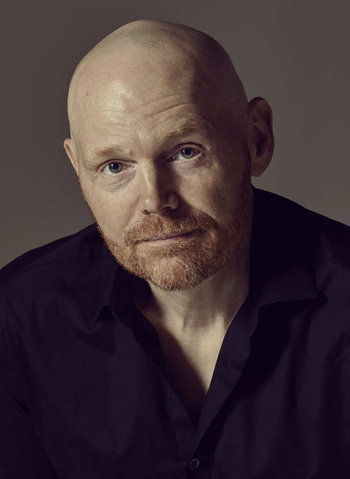 Hey, what's going on? I'm Bill Burr and it's the Monday Morning Podcast

His comedy is frequently concerned with pointing out and mocking perceived Double Standards, especially with American culture. He also loves mocking the rigid standards imposed on men by the masculine ideal, and shows open contempt for the notion that Women Are Wiser. However, Bill does show an open distaste of stupid/fat/lazy people. In spite of his words, he is a nice guy, deep down.

Did we mention he's been involved with some amazing shows, like Breaking Bad and Chappelle's Show?

He also is a co-creator, producer, writer, and voice actor on F is for Family, his original animated comedy series on Netflix; he plays the main protagonist Frank Murphy. He also guest-starred on (of all things) The Mandalorian as the short-tempered sharpshooter Mayfeld.

His work features examples of: