Complaining About Shows You Don't Watch 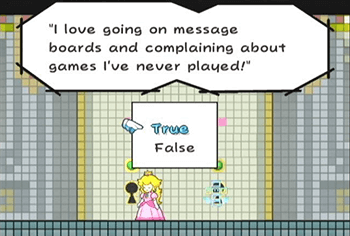 Yeah, Peach clearly didn't play Final Quest Heroes 9 before she bashed it.
"You might not know everything about a genre you refuse to listen to."
— sisabet, Hate the Song, Like the Vid?

An all too common phenomenon among characters who bash things: they don't actually look at what they're bashing. These are the people who insult movies before they even come out, or claim a video game Rated M for Money has more deplorable content than is actually there.

Also, sometimes this can be invoked if some leave out the full context of complaints to make a show they don't like look bad. A character could complain about a part of a show, and it may actually be worse than the person thinks. Or they might end up disliking a show for a different reason.

Now there is some Truth in Television to this trope, but while some people have revealed (directly or accidentally) that they haven't watched shows, just as often many will accuse them of it simply for criticizing it (even when people are merely criticizing preview elements for shows not out yet).

Even for characters in a show doing this, this trope can be driven by other reaction tropes, such as:

Infamous real life moral guardian Mary Whitehouse appears in puppet form on Spitting Image to declare her outrage against the show after its first ever episode aired the previous week.

Infamous real life moral guardian Mary Whitehouse appears in puppet form on Spitting Image to declare her outrage against the show after its first ever episode aired the previous week.