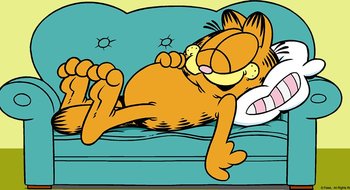 A trait cats are commonly associated with is laziness. Cats are known for spending long portions of the day sleeping. On average, cats sleep from 15 to 20 hours per day.

This trope goes hand-in-hand with Cats Are Superior and Cats Are Snarkers. Many cat characters are under the impression they should be pampered and that, as a result, it's fine to lay around all day doing nothing.

A large reason for this portrayal is that cats are crepuscular (unlike diurnal humans). They're most active when humans are asleep and tend to be inactive when humans are at their most active. As a result, it looks like your housecat is just lazing around all day. They also do sleep a lot (as mentioned, on average between 15 and 20 hours a day). Incidentally, dogs also sleep a lot, but aren't known for this like cats are (save for Bassethounds and Bloodhounds), probably because dogs are generally more visibly energetic when they aren't sleeping.

This trope also affects wild cats to various degrees. Less glamorous portrayals of lions (especially males) will show them as lazy and pompous, rather than their more common regal "king of the jungle" portrayal.

Compare Dogs Are Dumb, which usually involves lazy dogs when not surprisingly, just like dogs, cats can be just as dumb when they are lazy, in which dumbness and laziness go hand-in-hand. Also compared and contrast with Buffoonish Tomcat, in which where cats are portrayed as dumb, but are more prone to slapstick, being comically stupid, comical and cartoony or just lack common-sense than being like a everyday housecat. For other lazy creatures, see Lazy Dragon, Sluggish Seal, and Laid-Back Koala.