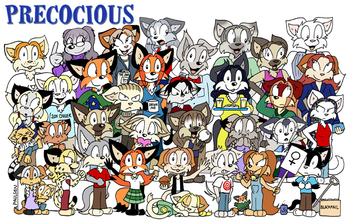 Most of the main and recurring cast.
"Where cognitive dissonance thrives! Cute furry little animal children will lead us into chaos!"
Advertisement:

Precocious is a Furry Webcomic by Christopher J. "Chrispy" Paulsen that stars a rather large group of "superintelligent" children who live in two separate neighborhoods, and who just happen to be anthropomorphic canines and felines. The main characters are known for being completely (but lovably) insane in one way or another. Not very serious, but very funny, the comic is about those children/mad scientists in their everyday lives.

The comic is presently on indefinite hiatus.