Thumbtack on the Chair 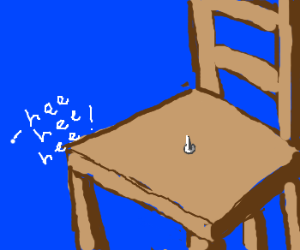 Strong Bad: Okay, let's get down to brass tacks.
Homestar: Oh, I didn't bring any. I drove.
Strong Bad: (to himself) Oh, this is gonna be painful...
Homestar: What, the tacks? I'll bet. Try not to sit on 'em.
—Homestar Runner
Advertisement:

A prank that has been done lots of times throughout the years, this is when a character places a thumbtack in a chair, and when another character sits down, what results after that is a pained jump due to the sharpness of the tack. In cartoons, this may sometimes result in a Pain-Powered Leap. Also the rare prank that women (usually schoolteachers) tend to be the victims of more than men.

Related to the Whoopee Cushion, but much more painful. May be just as embarrassing. Compare Butt Biter and Rump Roast. Subtrope of Pain to the Ass, as it results in a literal pain in the butt.