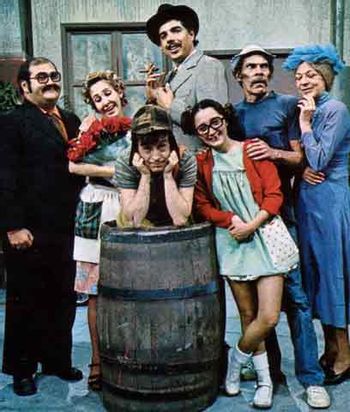 Legendary Mexican Sitcom (and staple of popular culture) about a little orphan boy and his quirky neighborhood. Famous for casting adults as little children. This lets the show get away with having many rather awful things happen to the kids without it being too horrifying, since they're really adults and playing parodies of kids, anyway.

The show was created by comedian Roberto Gómez Bolaños (whose artistic name was Chespirito, "Little Shakespeare"), along with other classic sketch characters like El Chapulín Colorado. Chespirito is considered by many to tie Cantinflas as Mexico's greatest comedian, and his sketch comedy shows are beloved amongst the entire Latin American population.

The show relies mostly on Bottle Episodes. Most of them take place in the main courtyard or patio of the "vecindad" (community houses) where almost all of the characters live. Sometimes, there are episodes where the kids are in school or some other location, like the often-mentioned but rarely-seen "other patio", or the small business some character owns.

The show began in 1971, as a segment in a Sketch Comedy. In 1973, this segment got its own Half Hour Comedy. The show proved to be very popular, and at its peak of popularity spawned a lot of merchandise. After the TV special El Chavo en Acapulco, two major actors left the series, taking their characters with them because of licensing issues, which caused what many believe to be inferior quality episodes. Soon after, "El Chavo" and its sister show El Chapulín Colorado were merged into an hour-long sketch comedy show called "Chespirito" (fittingly, since they originated as sketches on the original "Chespirito" show). On "Chespirito", few new Chavo scripts were written, but the restaging of old Chavo episodes was a regular feature on the show until Chespirito retired the character in 1992.

The show has been too difficult to translate, due to the nature of its very regional humor. The only exception is Brazil, where the show was renamed Chaves and got an over-the-top translation.

Despite its excessive regionalism, its lack of "sophistication" and its very dated appearance, the show is still very popular in syndication and has been a staple of TV channels not only in Mexico but also almost all Central and South American countries (And Spain)note and in the U.S., for that matter for years. Many people watch it for the nostalgia factor, but others watch because of a deep identification with the struggle of the characters. In Brazil, it is so popular that when the channel that broadcasted it tried to cut it from their schedule after almost twenty years of uninterrupted transmission, the public reacted with such outrage that they had to restore it almost immediately. There's also an annual El Chavo Fans Meeting.

The show is considered to be quite possibly the most beloved and successful comedy show in Latin American history; it's literally IMPOSSIBLE to go to any country in Latin America where this show was not shown. Part of its success was based on the social status of the characters: they were working poor who tried to make the best out of their lack of money and tried to lead decent, happy lives in spite of it. This attitude was embraced by the poor masses of Latin America, making the show a success. It was also successful for being a comedy show that was appropriate for all ages, yet still maintained a level of sharpness and sophistication that did not insult any audience.

In 2006, El Chavo got an animated adaptation.

Chavo and Quico proceed to "plant a Chilindrina tree" by burrying her feet in large flower pot and pouring water on her.

Around 137 episodes later, in 1977, we get a flashback of Florinda's husband, in which she gave the same response when he said their son Quico had got his face (also a case of same-actor).