Series / Chico and the Man 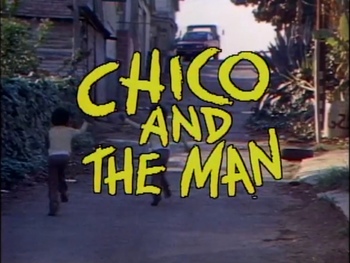 Chico and the Man was a sitcom that aired on NBC from 1974–78, starring Jack Albertson as Ed Brown ("The Man"), the elderly owner of a run-down garage in an impoverished East Los Angeles barrio, and Freddie Prinze as the streetwise young mechanic Francisco "Chico" Rodriguez.

The initial premise saw Chico, a Chicano-Latino, arrive in Los Angeles looking for work and his next big break. One of his stops is at Ed's Garage, where the cranky Ed is in a foul mood and—basically wanting the world to go away—uses ethnic slurs to drive Chico away ("Go away, and take your flies with you!" was generally the most quoted one in negative reviews of the pilot). Chico leaves disappointed, but late that night, he returns, cleans the garage, and moves into an old van parked in the garage. Ed grudgingly gives Chico a job, and as the series progresses, the two warm up to one another. Ed's cynical, bitter view of the world changes (he had become a virtual alcoholic upon the death of his wife several years earlier) and he eventually comes to accept Chico as a surrogate son.

Two other characters were added early: Scatman Crothers as Louie Wilson, the neighborhood garbage collector; and Della Reese as Della Rogers, the landlord. Also seen on occasion was Isaac Ruiz as Mando, one of Chico's best buddies.

Things went well for the first couple of years, but behind the scenes, things were not well for Prinze, the promising, bright, telegenic, and charismatic young comic that viewers knew. Only his close friends and his wife knew that he suffered from severe depression. Unable to cope with sudden success and the balance of fatherhood (he's the father of Freddie Prinze Jr.), he turned to drugs... and eventually bought a gun. In January 1977, his wife of less than 15 months walked out on him, taking Freddie Jr. with her. One thing led to another, and on January 28 – just hours after taping completed on the ironically named episode "Ed Talks to God" – he pointed the gun at his head. Various stories have circulated about others who spoke with the elder Prinze in his final hours, but it is known that his business manager, Marvin "Dusty" Snyder, learned of Prinze's intentions and tried to intervene but walked in just as Prinze fired his gun. Less than 24 hours later, Prinze was dead.

What to do? As a stopgap measure, Prinze was written out as being "away," visiting his father in Mexico, while several scripts in stock that focused on the other characters were re-written, either removing Chico's lines or giving them to other characters. With ratings still good, it was decided to introduce a new "Chico," not an adult but a young tweener named Raul (Gabriel Melgar). Raul is a 12-year-old orphaned street urchin who stows away in the trunk of Ed's car. (Ed and Louie had gone on a fishing trip to Mexico when Raul stowed away.) Raul's circumstances are explained and Ed decides to adopt him. A few months later, Spanish-American comedienne-actress Charo joined the cast as Raul's Aunt Charo.

Toward the end of Season 4, the Tearjerker episode, explaining that Chico had indeed died, was produced and aired, framing the whole thing around Ed angrily berating Raul for getting into Chico's things (smashing Chico's guitar in the process) and a scared Raul running away; Ed eventually finds him and apologizes. In many ways, that brought closure not only to Ed (and by extension, Albertson) but to viewers and the series. A few more episodes were left, but in reality, with Prinze having been dead a year, the series had run its course.

The series remains influential today for its on-screen chemistry and Prinze as a hard-working Chicano-Latino role model. Latino singer José Feliciano, best known for his cover of The Doors' "Light My Fire" and his Christmas song "Feliz Navidad," performed the theme song.

Chico and the Man provides examples of: