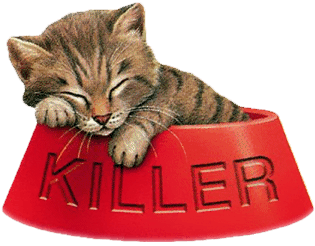 Seriously, he's not.
Hobgoblin Cleric: Sir, your odd talking skull is speaking of the Perilous Path of Crushing Doom.
Redcloak: Please tell me it's actually filled with cute fuzzy bunnies, and they just named it that to be ironic.
— The Order of the Stick #190

note Which is not an example; it's as dangerous as the name suggests.
Advertisement:

Here it comes. The Harbinger of Death, It Which Devours Your Soul, Your Worst Nightmare.

Turns out, the creature in question is just a cute animal, with a scary name but completely harmless. Upon further inquiry, you'll learn that it was named by a child, an idiot, a Trickster or some mix of all three, with smugness or bunny ears as optional extras.

The polar opposite of Fluffy the Terrible. Subtrope to Non-Indicative Name. Also compare to Sealed Evil in a Teddy Bear. If it does have the destructive power despite the innocent appearance, it is a Killer Rabbit. Still, it's a good idea to Beware the Nice Ones.

Despite the name, he's among the nicest, if not the nicest villains in the show.

Despite the name, he's among the nicest, if not the nicest villains in the show.