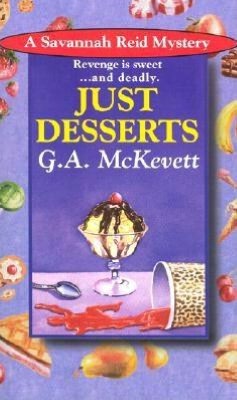 Savannah Reid is a series of mystery novels by G.A. McKevett, the pseudonym of author Sonja Massie.
Advertisement:

Middle-aged Savannah Reid is proud of her Southern heritage and not ashamed of her plus-sized body. After being kicked off the police force because she discovered that some of the higher-ups would be implicated in a case, she opens her own private investigation company. Though it may not be the best-paying job, she's got her friends to help solve the case: Tammy, her enthusiastic assistant; Dirk, the crabby cop with a heart of gold; and Ryan and Gibson, a pair of ex-FBI agents.

The series, in order:

At least one spinoff - Murder in Her Stocking, a prequel featuring Granny Reid - is in the works.