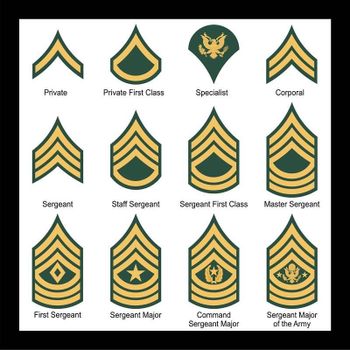 Sometimes when a person is acknowledged for their deeds or their mastery, they are given a means to tell everyone at a glance. When you literally 'earn your stripes,' you get a physical change in appearance that indicates your rank.

Usually this is a costume change like a new uniform. If not a whole new outfit, then a subtle change of accessory, or another customization can do the trick. Other times it may be a bodily change like ritual scars, tattoos, or a haircut. They can be bestowed in an Awesome Moment of Crowning or graduation ceremony.

Earning them may be done by proving your valor in a real life situation, or passing a controlled set of trials and exams. Rookies look forward to the day they can wear them. We may follow a character as they go through the process, and learn the meaning behind the stripes instead of just idolizing the appearance and perks. Pride at proving themselves worthy of stripes is often its own reward.

The point is when you see a person wearing these stripes you know they demand respect. And wearing them without earning them properly is a social taboo, extremely disrespectful, and can even be a Berserk Button for members of the culture. Similarly earning them and refusing to wear them is a major symbolic rebuke to the ones bestowing it.

Supertrope to Color-Coded Patrician, and Hat of Authority. Often overlaps with Prestige Class. Compare Power Makeover when the power itself causes the transformation rather than ritual. Contrast Slave Brand, where a mark is given to indicate that you're lower on the totem pole, and is often by forced on rather than granted by merit. See Insignia Rip-Off Ritual for when the stripes are no longer deserved, regardless of which side does it.

Needless to say, this trope overlaps heavily with Field Promotion.