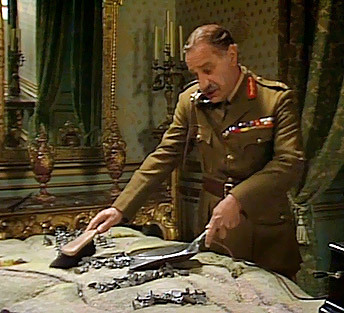 Field Marshal Haig playing with his toys. Err, planning a new campaign.
Melchett: Don't worry, my boy. If you should falter, remember that Captain Darling and I are behind you.
Captain Blackadder: About thirty-five miles behind you.
— Blackadder Goes Forth
Advertisement:

Armchair Generals (and Admirals) are those persons who decide to critique and/or run military operations from the comfort of their... uh, well, chairs. This shouldn't be a surprise. There are two interpretations:

The gallant idea of a general who valiantly leads his troops from the front line is something that did happen in the past. In ancient and tribal societies, the best fighters were the ones who became commanders. Also, in the days before professional soldiers were a thing, part of the job of a commander was to inspire their forces to fight. If applied to modern battlefields, however, this would definitely be a case of Hollywood Tactics. If the tactics expert who leads your army dies in the first volley, the chances are you're going to lose. And even if he doesn't die, fighting with the troops is going to make it much harder for him to tell what's going on or relay orders.

Note that Armchair Admiral is usually an averted trope. Admirals very often work on the warships, and capital ships are floating command centers. They thus share the same dangers as do any sailors, both combat-related and perils of nature. Other admirals instead work at naval headquarters on land.

If they are merely incompetent anyhow, compare General Failure. If the commander isn't really doing much of anything, including giving orders, and just sits there waiting for the opposition to take him on directly, he's probably Orcus on His Throne.

Compare Miles Gloriosus. A common subversion to a character who first appears to be an Officer and a Gentleman. The YouTube War Expert is a specific online variant. The opposite of Risking the King.

While Asura, Yasha, Wyzen and Augus fight in the frontlines, Deus, Olga, Kalrow and Sergei lead from their ships.

While Asura, Yasha, Wyzen and Augus fight in the frontlines, Deus, Olga, Kalrow and Sergei lead from their ships.