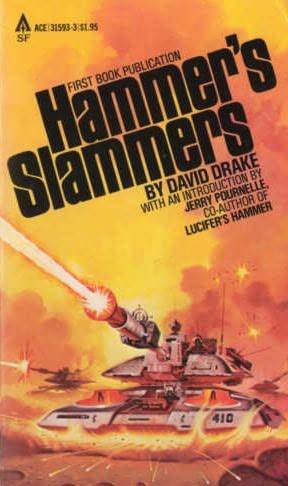 Hammer's Slammers is a series of Military Science Fiction short stories and novellas written by David Drake, based loosely off of various historical models and his time in the 11th Armored Cavalry during the Vietnam War.
Advertisement:

The Slammers are a futuristic mercenary group under the command of Colonel Alois Hammer, who leads the toughest mercs who ever killed for a dollar. According to Word of God, partly based on the French Foreign Legion in the 1950s, when that service had a large proportion of former SS in its ranks, but also loosely based on the Vietnam-Era 11th Armored Cavalry regiment

The Slammer Stories
The series consists of the following works:Two more novels are set in the same universe but not directly involving the regiment:
Repackaged Collections
The first five stories were repackaged in a three book set:

The entire series (excepting Cross the Stars and The Voyage) were repackaged (again!) by Nightshade Books (and again by Baen Books) as The Complete Hammer's Slammers, in three volumes. This included several novellas not included in the previous collections.

There is also a Traveller-compatible world guide, available here