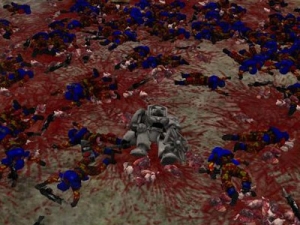 That's one hell of a last stand!
Englishmen! I am waiting here!
In my heart, I know not an ounce of fear!
We are waiting here my trusted axe and me!
Just come at me, I will not flee!
Death! I know that it awaits!
Soon I will enter Valhalla's gates!
— Amon Amarth, "The Berserker at Stamford Bridge"
Advertisement:

If you were looking for the flash game, look under The Last Stand. For the Arnold Schwarzenegger movie, see here.

The Siege has not killed you all, but the battle is over. Victory is impossible. Escape is impossible or futile. Surrender will not be accepted, or is dishonorable, or will lead to a Fate Worse than Death. The chance to cross the Line in the Sand has come and gone. The Cavalry might not be coming.

There is only one thing to do: make them pay. In blood. Make them pay for every inch they take. For every drop of blood you shed — shed a gallon of theirs. No matter that they outnumber you so badly that you can kill a hundred of them and still be overwhelmed. Take as many of the bastards with you as you can.

You can even hope that the casualties you inflict may aid others on your side when you are gone. Maybe. Even if no one will ever know.

If the forces are in a place with good defences, Truth in Television. Vastly disproportionate forces may be needed to get at such forces in Real Life. It usually ends badly for the smaller force but can become a Pyrrhic Victory for the larger.

Sometimes, The Cavalry or the Big Damn Heroes do show up. Sometimes, the enemy will run out of supplies, victuals, or ammunition, or decide a Pyrrhic Victory is not worth the effort, and leave the battlefield. Sometimes, the dogged opposition causes the enemy forces to decide to take an end-run around you. Sometimes, the news of newly-made peace will reach both the defenders and attackers and resolve the situation without a fight. In very rare cases, the defenders even manage to impress the attackers so much that they offer them extremely favorable terms of surrender that are not only perfectly acceptable but can be considered a victory. More usually though, this trope is a set-up for a Downer Ending, perhaps sweetened by one or two survivors Left for Dead, or sent away to Bring News Back of the loyalty, friendship, and unyielding honor of the doomed forces, leading to It Has Been an Honor — and the Dying Moment of Awesome.

In rare cases, it ends with Kill 'Em All and a full-blown The Bad Guy Wins. Sometimes the villains are forced into a Last Villain Stand, in which case Villainous Valor is often invoked.

Tip-offs when the character is wounded, or stays behind to allow others to escape, include:

May overlap with You Shall Not Pass!, but in that case, the characters want to maximize the time they hold out. They will sacrifice the chance to slaughter more enemies if it would cost their lives when they could buy more time.

At least one Moment of Awesome is likely, even if the characters know each one to be a Pyrrhic Victory. From the enemy standpoint, it is a Self-Destructive Charge.

Compare Roaring Rampage of Revenge, which often expresses similar sentiments about those killed. On a larger scale, Hopeless War. Bolivian Army Ending often implies such a stand. In Its Hour of Need often leads to one. War Comes Home tends to feature a variation of this with the scale of the conflict determining if it is the defense of a single stronghold or a nation itself. May also be related to Doomed Moral Victor. Stand Your Ground orders this. Characters who do this can also be considered Defiant to the End. Compare Do Not Go Gentle when it is individuals doing it. Compare And Contrast The Last Dance that is considered a one-on-one version of this trope. Contrast To Win Without Fighting.

It has nothing to do with a person being the possessor of the final Stand.

Say Hello to My Little Friend!

Cornered by Alejandro Sosa's men and coked out of his mind, Tony Montana decides to go out with guns blazing.

Say Hello to My Little Friend!

Cornered by Alejandro Sosa's men and coked out of his mind, Tony Montana decides to go out with guns blazing.