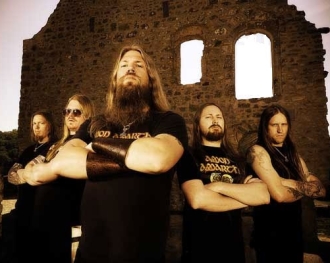 Amon Amarth is a Swedish Melodic Death Metal band from Tumba, founded in 1988, and is named after the Sindaran name for Mount Doom, a location in J. R. R. Tolkien's Middle-earth. They are known for a very dark sound with imagery taken largely from vikings and Norse Mythology.

Tropes of the Thunder God: