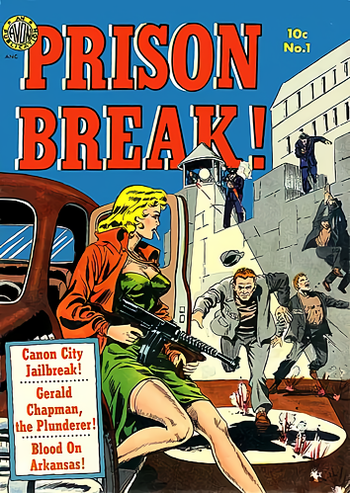 I'm innocent — innocent, I tells ya! They think they can keep me in this tin can forever? With all these plastic meal trays and soap that's just begging to be whittled into a gun? And this gang of jailbirds with nothing to lose? Give me enough time, and I'm outta here. And the D.A.'s given me all the time in the world…

This is a trope about prison breaks, which may or may not be from The Alcatraz.

The average prison break plot usually breaks down into a common series of elements, which have to happen more or less sequentially or the audience will call shenanigans. The details are often conflated, depending on the time available to tell the story; but rarely are they skipped altogether.

The Big Idea: Prison movie protagonists are almost always the new guy, who on his first day does something to gain a lifer's trust. The lifer will then hip the fresh meat to the escape plan and introduce the conspirators. Nearly always, the plan is fortuitously just days away from fruition, which is a writer's trick for confining the action to a short stretch of time. In this case, the scene may be a complete flashback of all the painstaking steps taken up to this point.

Inevitably, someone will say "You must be crazy! They'll shoot you down like a rabid dog if you try to climb those walls!" Sure it's crazy. Crazy Enough to Work.

Oh no, the snitch! Every prison has a snitch, a weaselly character who gives information to the guards in exchange for cigarettes. At a critical conspiratorial moment, he'll overhear the wrong conversation and our heroes have to decide how far they'll go to shut him up. This is almost always a choice between murder and making him an accomplice. In the latter case, you can bet the snitch will pansy out at the last second. Alternatively, they might discover they have a snitch within the escape party, in which case the newest recruit will always be suspect number one, but will rarely turn out to be the snitch.

The Night Before: Let's go over the plan, one last time. Every conspirator plays a part, and they'd better have it down cold. Depending on how complicated this plan is, we may cut away while the conversation is superimposed on a visual demonstration of what's supposed to happen. Not that it matters because...

The Great Escape never goes as planned. Close calls abound, someone chickens out or dies, and the way out, inevitably if improbably, runs right through the big nasty antagonist. The escape at times becomes an all-out riot when it should've been silent.

There are different flavors of escape, of course. There's the classic tunneling-under-the-wall-with-spoons, the hiding-in-the-laundry-cart, the diversionary Prison Riot, and of course Dressing as the Enemy and the Air-Vent Passageway escape. (There's also the stereotypical method of cutting through the bars with a file delivered in a cake and escaping down a Bedsheet Ladder, but that's mostly a Dead Horse Trope.) Any permutation of these will always involve a Sleeping Dummy, and almost always MacGyvering crude weapons from prison-issue goodies because it's a No-Gear Level. Bonus points if the plan hinges on bribing a guard with some nigh-impossible favor. The protagonists may be there because They All Met in a Cell. A faster and lighter version of this which often appears in children's media is Pet Gets the Keys.

Not to be confused with The Great Repair, which is about repairing a damaged vehicle to escape a Closed Circle. If you're looking for the movie, that's The Great Escape.