Anime / Lupin III: Prison of the Past 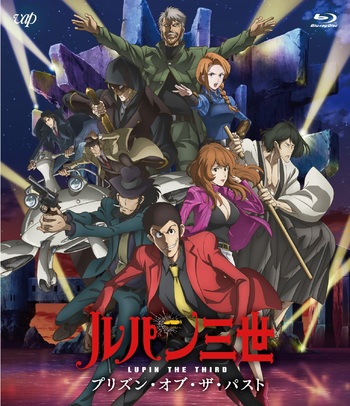 Lupin III: Prison of the Past note プリズン・オブ・ザ・パスト is the twenty-sixth Made-for-TV Movie in the Lupin III franchise, and the second of two released in 2019. It originally aired on November 29th 2019, and was directed by Hatsuki Tsuji, who previously worked on animation and direction on the Lupin III series going all the way back to Red Jacket. An English language edition commissioned by TMS Entertainment themselves in association with Bang Zoom! Entertainment using the usual Lupin dub cast debuted in November 2019 at Anime NYC and is available on Amazon.
Advertisement:

Hector Corbett Finnegan, a legendary thief seen as a modern day Robin Hood, has received an unprecedented death sentence for his crimes from the Kingdom of Dorrente. With this news, other thieves from around the world decide to descend on the impenetrable El Guille Prison to help him escape, for reasons ranging from owed favors to wanting to know where he stashed all of his legendary loot. Naturally, Lupin, Jigen, Goemon, and Fujiko are also on their way to assist in his breakout, but what they find inside the prison is a far more dangerous situation than anyone imagined. The fate of the Kingdom itself, as well as the solution to the mystery of what happened to Dorrente's royal family, is in Lupin and his companions' hands.