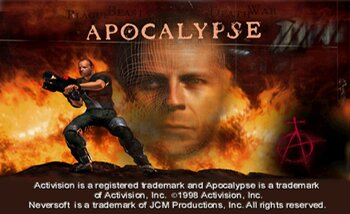 Apocalypse is a 1998 PlayStation third-person shooter developed by Neversoft and published by Activision studios, and it's widely advertised as one of the first PS games which employs mo-cap technology, to trace the movements and facial expressions from actors into the game's models.

Esteemed '80s and '90s action icon, Bruce Willis, lends his voice and likeness to the game as Trey Kincaid, a former SpecOps soldier in a futuristic megacity somewhere in the United States. In the future, a man known as The Reverend rules over society as a powerful and influential opinion leader, but unbeknownst to all, the Reverend is actually a power-hungry and evil scientist who leads an Apocalypse Cult. Learning that the awakening of the Four Horsemen of the Apocalypse which will spell mankind's extinction, the Reverend decides to abandon humans by summoning the horsemen first, making himself their leader and master, and a herald of mankind's extinction.

Trey Kincaid, formerly a colleague of the Reverend, finds out the truth, but ends up being imprisoned for his efforts. Escaping prison, Kincaid is a lone warrior against the four horsemen...

Not to be confused with the comic book character.

As the Apocalypse draws near, the Troper readies his keyboard and...