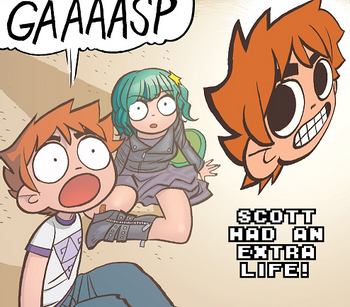 "What are you doing?"
"Getting a life."
"A lot of people like to call 1-Ups 'extra lives', or 'free men'. I like to call them 'life insurance.'"
— The Angry Video Game Nerd
Advertisement:

An item or event which increases the number of Video-Game Lives the player will have to continue following death. In simpler games, where the player is a One-Hit-Point Wonder, each time the player receives a critical injury or falls into an abyss, one life is deducted from his reservoir. When they are depleted, the game is over. More complex games deduct a life only when the Life Meter is emptied. Also, most modern games typically do something more friendly than simply end the game: the player is penalized, generally by having to restart the major area ("world", where losing a life with lives in reserve merely requires that the player restart the minor area), or from his last saved game. Some games used "continues", much like extra lives but senior to them.

The distinction between the stockpile of extra lives and the Life Meter has faded for most game genres. Consider that "video games" started as pinball machines, then moved to arcade consoles. Customers paid for the games a nickel, then a dime, then a quarter or 50¢ or more at a time (as increased complexity and inflation increased prices). Charging for each life was essential for the game to be paid for. With games moving into home consoles, the game was paid for from the beginning, so having a limited number of lives to play is no longer necessary for most games.

Almost all games which measure lives include a means to increase the stockpile. Popular methods include:

The term is a shortening of the phrase "Player 1 Up", traditionally displayed in older arcade games where multiple players took turns playing, to tell that it's the first player's turn (i.e. "Player 1, you're up. Start playing!"). The notion dates clear back to pinball machines.

See Justified Extra Lives when there is an in-universe explanation, often an expendable clone, or a clOne-up.

Compare Auto-Revive. Also see Meaningless Lives for games that don't really rely on the importance of extra lives for a reason and therefore practically throw excess amounts of 1-ups at the player when it's not really necessary (unless it is).

The Polterpup revives Luigi if he has a Gold Bone

The Polterpup revives Luigi if he has a Gold Bone