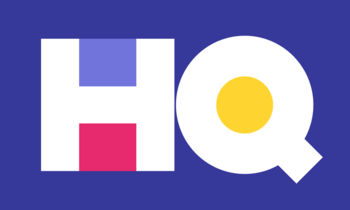 HQ, also known as HQ Trivia is a live trivia game for mobile devices. Played at 9 PM EST every day, and 3 PM EST on weekdays, players must correctly answer 12 questions (sometimes more) of increasing difficulty in a row in order to win real-world money.
Advertisement:

One of the biggest draws to the game is its host, the energetic Scott Rogowsky. Occasionally, other hosts will take Scott's place. Matt Richards permanently replaced Rogowsky in 2019. Richards regularly filled in when Rogowsky was unavailable.

The creators of the game, Rus Yusupov and Colin Kroll, are better known for previously creating Vine.

The game can be downloaded for iPhone here

, and for Android here