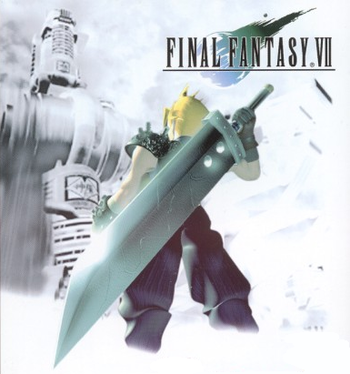 "There ain't no gettin' offa this train we're on!"
Advertisement:

Final Fantasy VII is the seventh entry in the nerve-twistingly popular Final Fantasy series. It's one of the most famous games of all time, as it helped extend console RPGs into the West's mainstream gamer community and was seen as the PlayStation's Killer App in its battle against Sega and Nintendo. In 2013 it was released in downloadable form on Steam.

The game's story begins in the industrial metropolis of Midgar. The city's prosperity has soared thanks to the electricity supplied by the Shinra Electric Power Company and their Mako Reactors. A eco-terrorist organisation known as AVALANCHE — who believe Mako Reactors are sucking the very Life Energy from the planet and will eventually bleed the world dry — has launched a violent offensive against the company and the Mako Reactors in an attempt to galvanize the less-fortunate portion of Midgar into action.

Cloud Strife, a former member of Shinra's elite private army SOLDIER, has joined AVALANCHE as a mercenary for hire. Alongside AVALANCHE leader Barrett Wallace and childhood friend Tifa Lockhart, Cloud begins to dig into the layers of corruption that permeate Shinra. The group discovers many of Shinra's secrets, including human experimentation and a plot to kidnap Aerith Gainsborough, a young woman believed to be the last of the mysterious Ancients.

The fight against Shinra changes completely with the reappearance of Sephiroth, a legendary SOLDIER who has been AWOL for years and is now blazing a trail of death across the entire world. Cloud senses the threat Sephiroth poses, and in an attempt to save the world — as well as get some answers to long-forgotten questions — leads his allies in pursuit of his former comrade.

Squaresoft (now Square Enix) published Final Fantasy VII on Sony's PlayStation console after a falling-out with Nintendo over the latter's extreme censorship policies (as well as a reported refusal to move away from the industry-standard ROM cartridge, which severely limited the scope of a game). Sony was more than willing to permit more "mature" content on its systems; coupled with the then-impressive storage capacity of the CD-ROM format, this proved to be much more accommodating to Square's design philosophy than Nintendo's restrictions. Squaresoft's change in platform allegiance is said to been a major contribution to the PlayStation's massive success in the Console Wars, with many developers following Square into Sony's camp.

Few people completely grasp the plot during the first playthrough; even for a RPG, this game can get extremely complicated. This is not helped by the poor translation, whose errors range from horrific spelling/grammar errors ("This guy are sick") to outright misinformation ("Attack while the tail is up"). The PC version corrected almost all of these errors, but also sanitized the game by censoring the most major expletives and having Barret generally speak normal English rather than Ebonics.

For nearly two decades, aside from the PC, this game, like all of Square's output in the fifth and sixth console generations, was only playable on the PlayStation line of consoles, whether it be through backwards compatibility, Emulation, or a portnote for the PlayStation 4. This since has changed with Square Enix bringing the game to mobile phones in 2015 for iOS and 2016 for Android. In early 2019, VII was released on Microsoft's Xbox One and the Nintendo Switch alongside other PS1 and PS2-era installments.

VII proved successful enough to spawn a fair amount of merchandise, including novellas told from various characters' perspectives and a raft of Spin Offs collectively known as the "Compilation of Final Fantasy VII". These various spinoffs include:

The characters have made appearances in several Fighting Games, starting with the oft-forgotten Ehrgeiz. Cloud and Sephiroth would later be playable in Dissidia Final Fantasy, while Tifa would join the cast in the sequel (as would Aerith, as an assist character). Perhaps most surprisingly, Cloud was eventually announced as a Downloadable Content character for Nintendo's Mascot Fighter Super Smash Bros. for Nintendo 3DS and Wii U, given he didn't have a major presence on Nintendo's platforms at the time. Just as surprisingly, Cloud returned in the next installment Ultimate, with Sephiroth joining the fun later as the third playable character of the Fighters Pass Volume 2 DLC set.

The original game and the Compilation contain examples of:

"You're sure messed up, Cloud!"

The Trope Namer himself, Sephiroth is defeated by his Arch-Enemy Cloud Strife after wiping the floor with the roster of Super Smash Bros. In response, he transforms into his ultimate angelic form: Safer Sephiroth.

The Trope Namer himself, Sephiroth is defeated by his Arch-Enemy Cloud Strife after wiping the floor with the roster of Super Smash Bros. In response, he transforms into his ultimate angelic form: Safer Sephiroth.