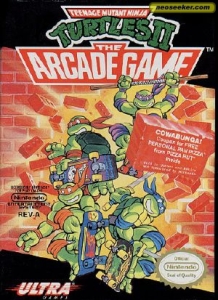 A 1989 Beat 'em Up by Konami based on the adolescent humanoid shinobi terrapins created by Kevin Eastman and Peter Laird... more specifically, the 1987 cartoon. As the title suggests, this game was released in the arcades, though only as Teenage Mutant Ninja Turtles. Several ports renamed it Teenage Mutant Ninja Turtles II: The Arcade Game to disambiguate it from the first console game — the Famicom version kept the original name, as its version of the previous game was renamed Geki Kame Ninja Den (Fierce Turtle Ninja Legend).

The plot is fairly simple: the four eponymous Turtles — Leonardo, Michelangelo, Donatello, and Raphael — must rescue their news reporter friend April O'Neil, and later their beloved Master Splinter, from the clutches of the Shredder and the Foot Clan. The action takes the Turtles from New York to the city's depths, where after saving their friends, the quartet heads into the Technodrome to defeat Krang and then the Shredder himself.

The arcade version of this game was a milestone in the genre. Up to four players could play, and the Turtles varied a little from each other in terms of attack range and speed. Donatello possesses excellent range with his bo staff but hits the slowest. Michelangelo and Raphael hit the fastest, but their weapons — the nunchaku and sais respectively — provide limited range. Team leader Leonardo hits with average speed and range using his katanas.

Many later games in and outside of the Ninja Turtles series, to say the least, have tried to emulate this one's style. Konami themselves would adapt and refine the game style for several later beat-'em-ups (The Simpsons, X-Men (1992), Bucky O'Hare, Sunset Riders, Violent Storm, etc.) and years later would even attempt this for the games based on the 2003 series with varying degrees of quality. Ubisoft applied the beat-'em-up formula to the Game Boy Advance game based on the 2007 animated film. A stand-alone 2013 game, Out of the Shadows (no relation to the 2014 movie), attempted to put a 3D spin on it. Raw Thrills did an arcade game of their own for the 2012 series in a beat-'em-up fashion. PlatinumGames gleaned a bit from the arcade for inspiration and mixed it up with their signature character action fare for their own Ninja Turtle game, Mutants in Manhattan. Dotemu (Streets of Rage 4, Windjammers 2) and Tribute Games took their own crack at a classic-style 1987 cartoon-based beat-'em-up in Shredder's Revenge.

There were several ports of this game. The Nintendo Entertainment System version featured downgraded graphics and audio, and allowed only up to two players (obviously since the NES's hardware wasn't exactly arcade quality), but it did add two new stages and swapped the second fight vs. Rocksteady and Bebop with a fight against Baxter Stockman in his fly form, making it the best port one could find of the game until the arcade version was re-released in 2007 for Xbox Live Arcade. The computer ports varied greatly in quality, from passable to underwhelming. A direct port of the original arcade game can also be unlocked in Teenage Mutant Ninja Turtles 2: Battle Nexus, but with altered music and the ability to put infinite credits into the game for unlimited lives.

In March 2022, both the arcade and NES games were announced to be a part of Teenage Mutant Ninja Turtles: The Cowabunga Collection, which would be released for all platforms later that year.