Film / Teenage Mutant Ninja Turtles: Out of the Shadows 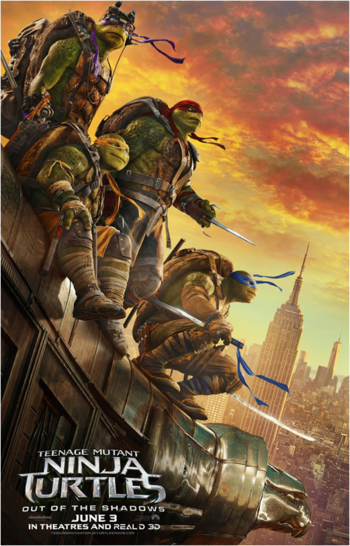 Lean, green, and back on the screen!
Advertisement:

Out of the Shadows is a film in the Ninja Turtles franchise, following the 2014 reboot of the film series. The fifth live-action film overall, it was released on June 3, 2016. It was also produced by Michael Bay and distributed by Paramount, while Dave Green (Earth to Echo) took over from Jonathan Liebesman as director.

Megan Fox reprises her role as April O'Neil. Most of the main previous cast returns, except for the Shredder, Karai and Baxter Stockman, who have been recast (now played by Brian Tee, Brittany Ishibashi and Tyler Perry). The movie also introduces Casey Jones (Stephen Amell) and Bebop and Rocksteady (Gary Anthony Williams and Sheamus), as well as classic villain Krang (Brad Garrett).

Has the same name as a 2013 video game and a 2016 board game. Confusingly, neither is based on this movie; the video game is inspired by the 2012 animated series, while the board game is an adaptation of the IDW comics.

Paramount announced that the movie will not have a sequel, causing this to be the last of this iteration of the turtles. Pre-planning for another TMNT live-action movie is underway.

Teenage Mutant Ninja Turtles: Out of the Shadows provides examples of:

Krang's voice is rather deep and more growly than his other incarnations, but he retains his normal level of hamminess.

Krang's voice is rather deep and more growly than his other incarnations, but he retains his normal level of hamminess.