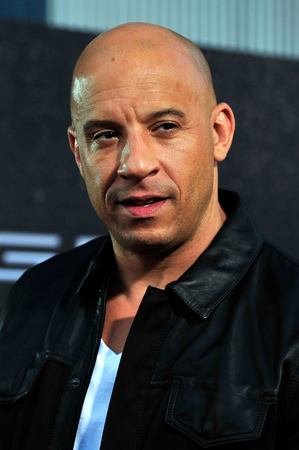 TV Tropes certainly has an influence on your life. But not as influential as family.
"I am flattered that they think that many people would enjoy my work. I don't approach any genre a different way than I may approach another one. I treat every role I do like a role worthy of applying whatever kind of tactic, process and talent I have."
Advertisement:

Mark Sinclair (born July 18, 1967), better known as Vin Diesel, is an American actor, producer, director and screenwriter. He is the Scary Black Man, only (mostly) white.

Vin has spent most of his film career playing bald, brawny badass guys who sound like they use mint-flavoured gravel and whiskey for mouthwash (which is the basis of his appeal for some). However, unlike most action stars, Vin has a huge advantage that helps to get him fanboys: he is a massive geek. A massive geek who could break your spine. Seriously, the guy loves Dungeons & Dragons so much, he wrote his own campaigns, got a temp tattoo of the name of his D&D character in XXX (it's "Melkor", if you're wondering), and even started his own video game company because he was tired of people making crappy video games out of his movies. Their first project (although not for long) was teaming up with Starbreeze Studios to make The Chronicles of Riddick: Escape from Butcher Bay, which many people named as actually being better than the accompanying film, and was named as being the best action game on the Xbox at the time. When they released the sequel, a large percentage of its sales were just because it included the original levels. So yeah, it was pretty good.

It gets better: one of the upcoming games is about his player character. Penny Arcade is actually attempting (kind of) to get him to join them in one of their podcasted D&D campaigns (despite the very real possibility that putting both Riddick and Wesley Crusher in the same room would destroy the universe).note Though according to Dork Tower, they already meet in secret as the League of Extraordinary GentleGamers.

Vin's probably most known for his work on the The Chronicles of Riddick and The Fast and the Furious franchises, but he's done many things, from big budget action flicks like XXX and Saving Private Ryan, to writing, directing, and starring in indie docu-dramas. He also voiced the title character in The Iron Giant. While Riddick is a murderer, Vin Diesel is reportedly a very sweet, polite guy. And by the way, it turns out that He Really Can Act, as evidenced by his acclaimed performances in Find Me Guilty and Boiler Room, as well as the aforementioned voice acting role in The Iron Giant.

Also, you know that "Chuck Norris Facts" fad that you may have heard of? Originally, those were all Vin facts. The best one of the lot? "Rearranging the letters in Vin Diesel's name reveals his credo: I End Lives."

This actor's roles provide examples of: