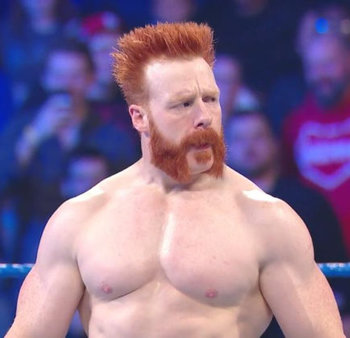 Stephen Farrelly (Irish form: Stíofán Ó Ferghaile, born 28 January 1978 in Cabra, Dublin) is an Irish professional wrestler. After having worked as a bodyguard, he took up the sport of professional wrestling after training with Cliff Compton, Tank Toland and Cindy Rogers in Larry Sharpe's Monster Factory wrestling school in April 2002, at Bret Hart's suggestion. He received an injury early on but returned two years later, debuting in Irish Whip Wrestling as Galldubh before returning to the name he was better known for, Sheamus O'Shaunessy. His exploits here lead to booking with larger promotions, including one affiliated with the Global Professional Wrestling Alliance in Austria. From there, Sheamus would eventually earn a developmental deal with the largest pro wrestling promotion left in the world, WWE.

He is the first Irish Whip Wrestling International Heavyweight Champion, and FCW Florida Champion, a three time US Champion

, and, alongside Cesaro as The Bar, a four-time WWE Raw Tag Team Champion and one-time SmackDown Tag Team Champion. He was also the 2010 King of the Ring winner, and 2012 Royal Rumble winner. He won the 2015 Money in the Bank ladder match and thus its Money in the Bank contract, which he successfully cashed in at Survivor Series 2015 to become the WWE World Heavyweight Champion.

He has appeared in a handful of movies including Two-Ton in The Escapist and Rocksteady in Teenage Mutant Ninja Turtles: Out of the Shadows.

"We don't just list the tropes, we ARE the tropes!"

That's Sheamus, fella.
You look stupid!
I DO NOT LOOK STUPID!