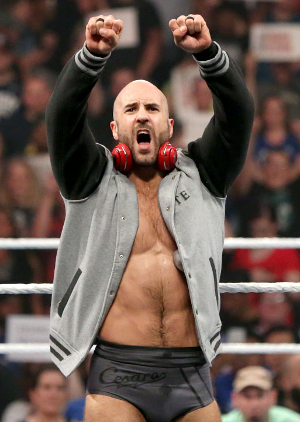 Claudio Castagnoli (born December 27, 1980), also known by the ring name Antonio Cesaro, which was later shortened to Cesaro, is a Swiss professional wrestler. Castagnoli made his debut in Essen Germany in the year 2000 for westside Xtreme wrestling as Tenshi Takami before changing his ring name to Double C. Castagnoli eventually signed with WWE, where he was the WWE United States Champion

. He was previously known for his work (under his real name) in Ring of Honor, Combat Zone Wrestling, Pro Wrestling Guerilla, CHIKARA, and the Japan-based Pro Wrestling NOAH. Among his in-ring achievements, he is a former 2x CZW World Tag Team Champion

, the inaugural winner of the WWE Andre the Giant Memorial Trophy, and has also held several titles in Switzerland, Germany and Great Britain.

Cesaro formed a tag team with Tyson Kidd and they won the WWE Tag Team Championship in February 2015, eventually dropping it to The New Day in April. The team was then put on hiatus due to Kidd suffering a neck injury, and then officially disbanded once he retired due to that injury. In the meantime, Cesaro managed to capture the WWE (Raw) Tag Team Championship four more times in December 2016, June 2017, November 2017, and January 2018 - this time with Sheamus in a team called The Bar.

In February 2022, Castagnoli’s contract with WWE expired and was not renewed.

"A trope list paid for by Swiss Money Holding"