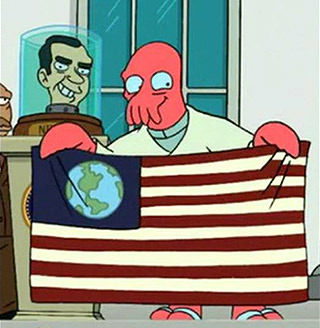 "Zoidberg actually matters for once!"
"Fare thee well going away,
There's nothing left to say.
Farewell to New York City boys,
To Boston and PA,
He took them out,
With a well-aimed clout,
He was often heard to say,
I'm a free born man of the USA!"
— The Pogues, "Body of an American"
Advertisement:

When a character expresses a great deal of love and patriotism for their homeland when they're not native (by virtue of ethnicity or place of birth) to said homeland. The immigrant character may even display more fervor for their adopted country than those that were born and bred there. However, how common/acceptable this is varies by culture.

Most countries in the world throughout almost all of recorded history have been what is now called "ethnic nationalist", which is unsurprising given most modern nations developed from tribal groups note the very word nation comes from the Latin natio, whose meaning encompasses both race and birth. Meanwhile ethnic comes from ethnos, which in Greek denotes nation/ethnicity, the two concepts being identical, as they are in most cultures. However a few countries that have only been created comparatively recently - primarily Europe's New World colonies - have been argued by some to instead be constituted on the basis of "civic nationalism", a concept invented in the 19th century, in which belonging to a nation is determined by one's feeling of belonging to it, rather than by actual descent. note Although it's important to note that a) this assertion is highly debatable, even today, and more so the further back in history you go, when even the the national identity of the young settler colonies of Britain had a strong ethnic and racial component—even in America, popularly considered to be the prime example of Civic Nationalism, citizenship/immigration was originally restricted to White North-Western Europeans, then in the Early 20th Century to Southern and Eastern Europeans, and only in the late 20th century was it opened up to people of any race.

This is not about immigrants in general, but specifically those who love their new homeland (more than their old one).

Compare Foreign Culture Fetish for immigrants who admire other countries in more of a theme park version sort of way. See also "Rediscovering Roots" Trip, where the descendants of immigrants travel to their family's old country.